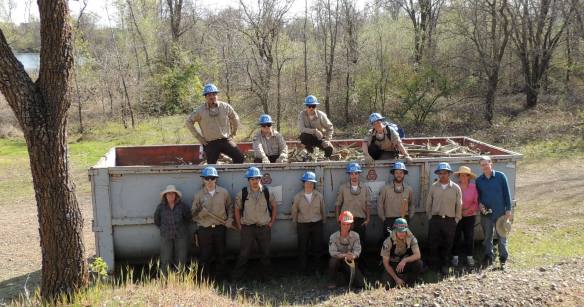 CCC members and volunteers fill one of the dumpsters with invasive plant debris.

In the fall of 2012, the Mount Lassen Chapter of the California Native Plant Society (CNPS) partnered with the Teichert Ponds Restoration Foundation and the City of Chico to remove invasive privet trees (about 15,000) and olive trees (about 5,000) from the north side of Teichert Ponds.  Over the 50+ work sessions spanning 5 months, project volunteers spent 630 hours removing the trees and an additional 25 hours picking up 40 bags of trash.  These same volunteers donated $925 to pay for the 6 30-yard roller bins that were used to take the debris to the city’s compost yard.  The Foundation provided publicity for the project while Chico’s Park Division arranged for property access, helped to recruit volunteers and also loaded some of the vegetative debris into the bins.

This project was undertaken because privets and olives had become very dense on the site.  They were spreading rapidly, with thousands of seedlings and saplings and hundreds of full-size trees.  Removal of other invasive species could not be undertaken until they were gone.  Privets are on Butte County’s Noxious Weed List and feral olives are a host for the olive fruit fly, a pest that reduces the value of the county’s olive crop.

The removal of so many mature, seed producing privet and olive trees will reduce the future infestation of this site and nearby open space and residential areas.  As the dense vegetation has been thinned out, native plants such as California bay, spice bush, blue elderberry, manroot, and pipevine will have a much better chance of survival with the reduced competition for water and light.  Neighbors who walk in the area say they feel safer walking along the dirt road now that there is more clearance and visibility on the sides.  The work also reduced the number of locations for hidden homeless camp sites.

After picture of the trail. The open, parklike setting is more inviting for visitors, and makes way for native plant regeneration

While this was the first restoration project at the Ponds, many additional projects are in the planning stages, including a kayaking trash pickup on the ponds themselves, privet and olive tree removal on the east side, repairs to the fishing and wildlife viewing trail that goes between the ponds, interpretive signage, viewing platforms, a picnic table, many more targeted invasive species eradication efforts and replanting with native plants that provide better food and habitat for wildlife. 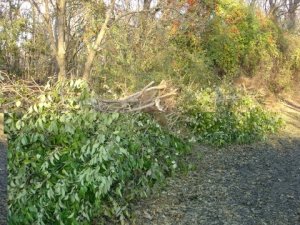 Pile of large privet trees that were removed to prevent further environmental damage to the area.